Considerations about technologies applied to different events in space

Raise your eyes up to the Sky!

On December 21, 2020, at the summer solstice in South hemisphere, a rare encounter took place in the Sky: the planets Jupiter and Saturn were so close and so perfectly aligned that, from the perspective of Earth, they looked like a single planet, bigger and more brilliant, offering the human imagination all sorts of magical thoughts. This perfect convergence, with such proximity between the two celestial bodies, happened for the last time 400 years ago (being 800 years ago at night, as we were lucky to have seen it from Brazil).

Astronomers baptized this perfect encounter as the “Christmas Kiss”, and that night, certainly, the vibrations and wishes of millions of people who were watching the spectacle, were launched into the Universe.

Watching the harmonious orchestration of the planets and also other recent findings, such as the first real image of a supermassive black hole captured by the Event Horizon Telescope (EHT) team, in 2019, has been granted to us by the science of Astronomy, through the work of competent scientists and researchers, supported by sophisticated technologies.

On December 6, 2020, Hayabusa 2 (space probe from Jaxa - Japan Aerospace Exploration Agency), once again, accomplished its mission with excellence when it brought to Earth samples of the asteroid Ryugu, which orbits 300 million kilometers above our planet. The purpose of this mission with the collection of these samples will be to research the origin and evolution of the land, sea, and life as we know it 4.5 billion years ago, with the exploration of these asteroids called C-type, rich in water and organic matter.

In a debate promoted by Japan House in São Paulo, during the Astronomy Week - April 04 to 09 - this year, I learned from astronomer Fernando Roig, from the National Observatory, that asteroids carry valuable information about the composition of the primordial nebula, from which the solar system was firstly formed. Roig already predicts that, in the future, due to its mineral-abundant composition, there may be commercial exploitation of asteroids as sources of ores, since those are raw materials in the manufacture of microchips and superconductive components, for example.

The success of exploratory missions which require very high investments such as the Hayabusa’s depend on the collaboration technologies applied to different areas of knowledge. High-performance computing is also a very important tool in projects like this. Still according to Fernando Roig, the simulation of numerical models of hydrodynamics, for example, probably helped to predict the behavior of the asteroid fragments flow when the sampler horn mechanism fired the projectile with enough pressure to cause an artificial crater on the soil surface.

The moment of impact would certainly cause the displacement of small fragments and the anticipation of the understanding of the movements of those fragments would be extremely important so that they would not splatter the probe itself. Simulations like this, with high precision, and which are still performed in the planning phase of the mission, are only possible on computers with large computational capacity, such as Supercomputers.

In fact, the developments and legacy of NEC’s researches for the area of Satellites and Space Probes are immense. As a result of this investment, increasingly modern satellites are applied in different initiatives, such as Monitoring Natural Disasters, Agriculture, and Urban Infrastructure. It is possible to send Earth observation data with greater resolution and performance out from space, contributing with important information that, together with other variables, allow the optimization of solutions aimed at reducing the risks of natural disasters or the application of Intelligence. Artificial in agriculture, for example.

400 years ago, the crew of this great space ship Gaia, witnessed the meeting of Zeus and Kronos in the Sky. Today, 400 years later, this reunion marks a new shift with new discoveries and knowledge, inaugurating a new Era for all of us, its descendants. 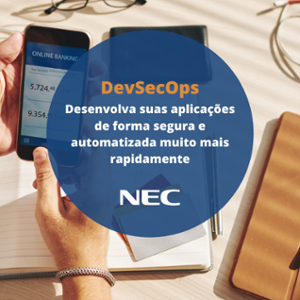